Sometimes when you set a goal for yourself it does not always work like you expected.  In some cases anything that can go wrong does and other times the unexpected happens and you just have to go with the flow.  Neither or these were the case when it came to me achieving the goal of running my 60th marathon at the age of 60.  Perfection is all I can say to describe the experience.  I have planned for this for several years and as most of you can probably understand this was not an easy feat.

The exact Marathon for this to occur was also part of the plan.  Le Marathon de Medoc in Bordeaux France is one of the most famous Marathons in the world.  It required extra ordinary training since you were to run the 26.2 miles thru 59 vineyards and had over 20 wine tasting stops along the way.  This included all you could bare to eat oysters at mile 24.  Everyone and I mean everyone dresses up in some outrageous costume and of course I was no different.

The weather started out overcast and right after the half way mark it rained cats and dogs.  That turned the dirt and gravel roads into sheer mud and puddles.  It seems as though most sprinted from one wine stop to the next.  They would pass me and I would pass them back as they stopped to sample the different wines along the way.  There was a 6 1/2 hour cutoff which usually I do not take into consideration but in this case I had to keep that fact in the back of my mind.  There were times that it was impossible to do anything but to walk or come to a complete stop while trying to maneuver around the mass of humanity that were drinking wine like there was no tomorrow.

There were also teams of 6-10 pushing or pulling various wagons and such,  complete with stand up bar to use at the different wine tastings.  They were somewhat difficult to navigate around or in most cases they would run you right off the road.  My plan was simple, wear my costume the entire route, make it to the 37K wine stop within 5:30 and then drink my way to the finish.  I was told the best wine was there so I figured why waste my time on anything else but the best.  I enjoyed a half dozen oysters at mile 24 and came across the finish in a respectable 6 hours.  That was probably the longest it has taken me to finish a marathon but in this case I figured I was going to get my monies worth so why rush it.

The start of this trip did have one unexpected surprise.  I have mentioned before that I use airtreks.com for all of our air travel and they do a get job and have saved me thousands.  They buy tickets in bulk and resell them at a discount.  You have to have at least 4 legs overseas, including the crossings.  As a Delta Platinum Elite member one thing that never happens is upgrade on the crossings.  I have gotten many in the States but never going overseas.  As a matter of fact when you go on line it basically tells you not to even think that will ever happen.

After enjoying a few glasses of wine in the ATL Delta lounge we made our way to the the gate.  Got there right in time for boarding, made our way up the elite member line. I gave the agent my passport and ticket and a red light and beep went off.  The same for Catherine and we were pulled to the side while another agent did some work on the computer.  The agent at the gate asked if the other needed our bag tag numbers and the only thing that came to mind was that we were being pulled from the flight for some reason.  I have had miss connections, delayed and cancelled flights and even volunteered to catch a later flight but never go this far to have things head south.  The agent at the computer turned to us, handed us our tickets and with a smile said, “You had been upgraded.”  Needless to say I was very happy but still a bit skeptable.  Seeing is believing in my book.  Low and behold we were told to make a left a the boarding door and the numbers overhead of our seats matched up with our tickets.  It was like Christmas morning, when I was a kid, and the first thing I did was stop the next Flight Attendant going by and asked for a Mimosa.

Quick shower and downstairs for the welcome reception and dinner.  Let the endless flow of wine begin.  The entire next day we went from one vineyard to the next while they tried to prove that their wine was the best.  After a few stops and great lunch I was sure that I could actually tell the difference.  As we drove along the roads from one vineyard to the next there were ripe grapes as far as the eye could see.  They tasted great and were only a few days away from them being picked.

I was very surprised to learn that almost all the grapes are hand picked and it takes an, all hands on deck effort, to pull it off, in the two weeks allotted to get them all off the vines.  A group of gypsy type workers will move in for free room and board including wine and wages.  After this task is complete they move on.  It was somewhat difficult for me to get my head around the fact that all those vineyards were going to all get picked clean in two weeks.  The numbers of workers required did not seem to add up since all the vineyards were all giving us approximately the same day they were going to start the process.

If running thru the vineyards was not enough they had a ritual the next day call Balade, where you all gather at the selected vineyard for the year wait for the cannon to go off and then walk about 5 miles from one wine tasting to another where each had music and endless wine.  Instead of glasses you were given a tin sipping apparatus to use at each stop.  It was tied to a lanyard to wear around your neck. 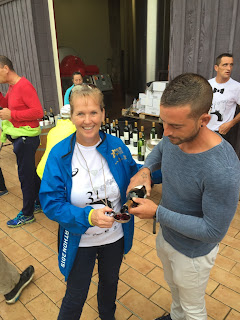 The last day in Bordeaux was topped off by a gala dinner at another very famous vineyard inside their Chateaux.  The 5 course meal included 5 different wines.  Each a little better than the last with the last one being poured out of a decanter instead of the bottle.  I guess it really needed to breath.  It was served with the cheese and for some strange reason it really tasted good after I few bites of cheese. I must admit I did not like it at all when I first tasted it.

We had an awards ceremony at the end and of course there were awards for the best dressed couple,  the fastest male and female in our group of 90 and a new category, which was, most colorful.  I had to laugh since I was the only one of color in the group but instead they were of course talking about what I wore during the race.  I would say if the shoe fits wear it.  So my 60 at 60 experience ended with me winning the award and received a very good 2011 bottle of wine.  Needless to say that did not become bus wine on the way back to the hotel that night.