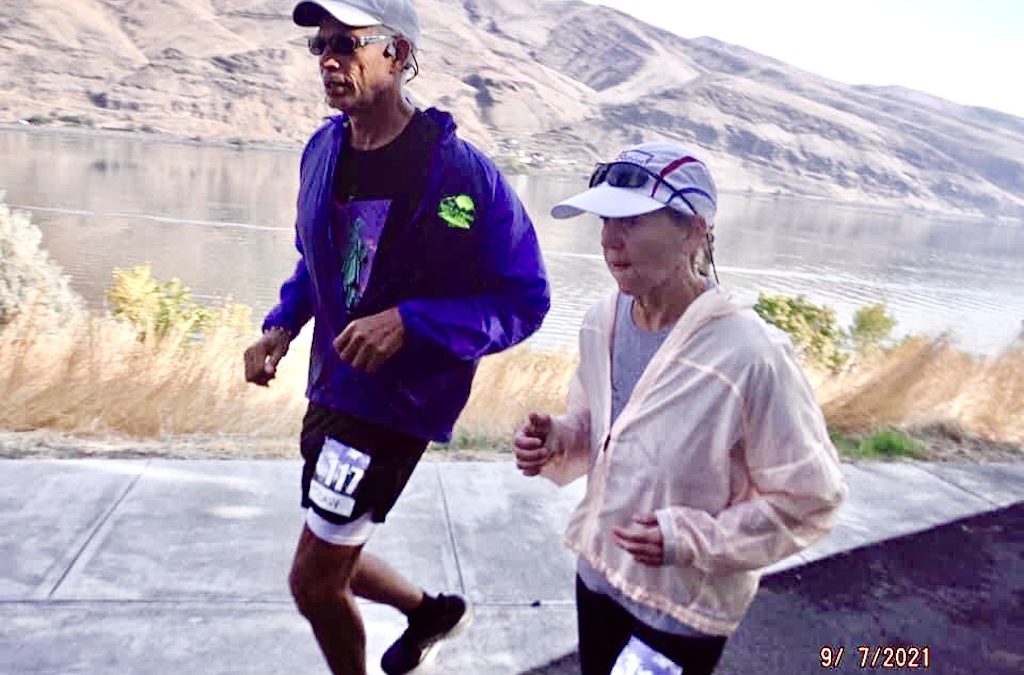 A chapter I wrote in the new book, Before the Diagnosis: More Stories of Life and Love Before Dementia. Creator and Editor, Ginny Heins.

Catherine was diagnosed with early-onset Alzheimer’s in 2014 at the age of 53. She is now in the moderate range in terms of the progression of the disease however she is still enjoying life to the fullest.

Marathons don’t define her but do describe her. The same determination and grit which is required to complete 26.2 miles, on foot, nonstop, in a race, have been her guiding light through the trials and tribulations of her current condition. April 2014, she was handed the detailed 29-page report from her neurologist that described her condition as early-onset Alzheimer’s or like condition. They say you really don’t know for sure until the autopsy so the three letters, EOA, will work for us, for now. We could have done some more expensive testing to rule out other word- salad ailments, but how we tackle the daily challenges would still be the same.

Catherine Elizabeth Popp grew up amongst her four highly competitive siblings when even having a meal was a competitive sport. At the dinner table, you got what you could and sharing was a personal foul. That attitude made its way to the football field for the three boys, with swimming and track, for all five of them. Catherine’s deceased dad, Tom, who succumbed to vascular dementia in his 70’s, threw her in the pool at six and simply said, “swim or drown.” She has been doing all the strokes possible ever since then in this race we call life, her favorite being the butterfly because of its level of difficulty.

As a child, Catherine swam like a fish, earning a multitude of ribbons and trophies that had to share space with her sister’s awards in the bedroom they shared. As an adult one sport was not enough for her so biking and running were added for one simple reason; because she could. For Catherine, winning was not as important as doing. The feeling of pushing herself was what made her feel the most comfortable.

Catherine is determined to live a full life even though there are many parts of it she may not clearly remember without a reminder. She definitely does not need to be reminded of the motorcycle ride she made to and from the west coast from her hometown in Indiana. She soundly repeats that story every time she sees or even hears a motorcycle go by, her smile as wide as ever, which includes her beautiful, sparkling, blue eyes. Catherine made the trip with a friend, each of them riding their own bike. It was an experience Catherine will never forget.

A college degree was something Catherine always wanted to earn and for her, no time was like the present. At the age of 32, she put the plan together to get it done in five years. That meant working at night, tossing packages, some the size of her, at UPS, and going to school during the day. Many thought that was a daunting task, but for her, it was just a way of life. That’s the way Catherine approached everything, with enthusiasm and a detailed plan.

Catherine’s daughter was in high school at this time so throw in taking care of her daughter, meal preparations, and sleeping, along with working full-time and going to college. My head swims with thoughts of how she was able to do this all by herself! It does explain how she can handle the daily changes to her mind and how it currently processes information. This gives a picture of how determined Catherine has always been, even now. Just like the attitude she takes towards running a marathon, she just puts her head down, puts one foot in front of the other, and never gives up.

Catherine and her daughter are only 18 years apart in age and she did the majority of the parenting all by herself. I still remember, to this day, when we first met, Catherine told me that she did not need a man and she went through most of her life proving it in her own way. She lost her husband when she was in her 30’s after only being married for a year. That is when marathoning came into her life like a guiding light. Her oldest brother took her under his wing to save her from the spiral of despair and they began the journey of running a marathon in all 50 states. They began with 5K, 10K, and 13.1 mile half marathon races as they worked up to the 26.2 mile marathon distance at the Chicago Marathon in 1997.

I met Catherine, by chance, as I overheard her talking to others about running marathons. I joined in on the conversation and I knew in an instant that she was the one. Her stories took me back to my years growing up in New York watching the New York City Marathon on TV. I dreamed of one day running in that race, not as one of the elite runners, the multitude of cameras following their every step, but one of the masses of humanity that followed way behind. When Catherine talked about running a marathon, determination oozed from her pores and I knew then that no matter what, she would always land on her feet.

I convinced Catherine to train me to run the New York City Marathon in 2000 and as they say, the rest is history. My thoughts were like most that complete a marathon, one and done, but she had other plans. Not sure if they included me but I was willing to tag along, as long as I could. Race after race became more daunting to me but seemed effortless to her.

In 2001 after 9/11, the Transportation Security Administration was spooled up in response, and Catherine, with an extensive scheduling background, joined forces as a Scheduling Operations Supervisor. She was responsible for the scheduling of all the agents in three airports in Kentucky. She was in her element, with everyone loving her even if they did not get exactly what they had hoped for on their daily schedule. She had a way to make everyone feel like they were her best friend and that she sincerely had all their best interests at heart.

Dogs, anything furry, and babies are her true weakness. Catherine took care of our two 90 pound dogs with ease, often having to referee between the two. Her days often started at 5:00 AM with these two highly rambunctious dogs. They frequently trained with her, with the Doberman completing a marathon with Catherine. My dog which was a Weimaraner had little interest in running that distance. He was more of a sprinter from one fire hydrant to the next.

I did take Catherine off course when it came to completing her goal of getting a marathon done in each state plus DC, when we went to Athens, Greece, to run our first international marathon as my 50th birthday present to her. We went in 2010 which was a big deal for the Athens Marathon. It was merely 2500 years prior, in 490 BC, when Pheidippides ran from Marathon to Athens and later
died. We were no longer getting faster, ourselves, so when the thought of us finishing the race in over 5 hours became apparent we grabbed each other’s hand and sprinted across the finish line. Me being over a foot taller than Catherine, the finisher photo had her completely airborne as if I was pulling a rag doll. The timing clock overhead read 4 hours and 59 minutes.

During conversations with others about our running prowess, Catherine was always quick to point out three things that separated the two of us.

One, that her fastest marathon time is eight minutes faster than mine. Catherine’s is 3 hours and 49 minutes.

Two, that she actually qualified for the Boston Marathon. A runner has to accomplish a previous marathon within a specified time limit for their age and gender. I, however, donated to charity to get the opportunity to run the coveted marathon.

Three, that she has run 15 more marathons than me. These three points will forever be.

One of Catherine’s greatest accomplishments is her only daughter. She has grown into a successful lawyer who runs a law firm with her husband. Together they have raised three fantastically ambitious children who all love to run which gives Catherine much joy. Before her diagnosis, they lived close by and she would visit them often to participate in many of their daily activities.

We enjoyed the adventures of travel to foreign lands as we would go on race-cations to places we could only imagine years prior. These international races slowed down the pace of Catherine’s goal of finishing a marathon in all 50 states, but it was something she kept a keen eye on. Goal setting is an integral part of who she is.

I started to notice that she was not on her usual A-game, and she would begin asking me to repeat plans jointly made. Catherine got a new boss and he was a “shake things up” type of guy. Routine was now her cornerstone so he made life at work more difficult, which, in turn, made it easier to help Catherine realize that something was just not right. To help protect her government job I made sure she saw and documented visits to the neurologist so that a simple firing by her new boss would not sweep the now obvious problem under the rug.

She was able to get a nice severance package including a timely pension with health care. Social security followed suit with a disability determination. The diagnosis, as it often does, changed our lives, as it does all, but our reaction to the news was counter-intuitive.

We both retired, sold our home, and became nomads running all over the world. Catherine’s resilience or reserve, as it were, is anything athletic, so we combined that with our love of travel. Together we have visited 81 different countries and run at least a half marathon in 35 of them with these events covering all seven continents. Catherine has completed 83 marathons, one Iron Man Competition, a 50 miler Ultra Marathon and many races and triathlons of various distances. Prior to her diagnosis, she completed four of the six major marathons, New York,  Chicago, Boston, and London. Since her diagnosis, she was able to achieve the other two in Tokyo and Berlin.

In October 2020 I had the pleasure to once again cross the finish line hand-in-hand with Catherine but this time it was when she completed her 50th state, in Narragansett, Rhode Island. She now has a fourth accomplishment to hold over my head and to brag to others about, but now, I doubt she will ever do so.

We celebrated Catherine’s 60th birthday, along with her 86 year old, highly energetic mother, at the Kentucky Derby which falls on Catherine’s birthday every five to six years. She was quick to remind us that she was also there when she turned 21 but did not actually see a single race. I wonder why.
Catherine’s new goal is to finish a half marathon in all 50 states plus DC and as of September 2021, she has 40 of them under her feet with five more, for a total of 45, planned by the end of the year. Catherine expects to reach her goal in spring, 2022. You can follow her continued adventures at RunningwithCat.com and read all about our life as nomads in my book, Running All Over The World, Our Race Against Early Onset Alzheimer’s. 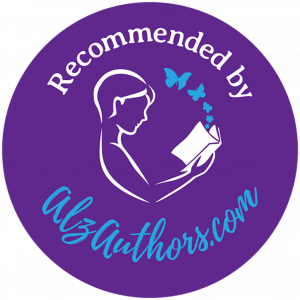