On June 12th it will be one year since my open heart surgery.  It might come as a surprise to some but it has been one fantastic year.  Back in 2012 during a routine FAA medical it was brought to my attention that I had a heart murmur.  Up until that point I was the picture of health and had no idea something was wrong.  I was running marathons like there was no tomorrow and had just completed an Iron Man Triathlon a few months prior.

My world was turned upside down but in reality nothing much changed.  I still kept running and we were on a wait and see when it came to a future operation date.  I kept track of all my vitals and was told that my running was good for me.  During the next 2 years I ran 13 marathons in 6 different countries and 7 different states.  I was slowing down but that did not matter to me since it was in my blood to run.

In April of 2014 it was decided that it would be best to have my Aortic Valve replaced and everyone pointed me to the Cleveland Clinic and that was the best decision since I still feel they did a fantastic job.  Even though they do these type of operations hundreds of times a month they made me feel like I was their only patient and in most ways like family.  My surgeon was also a runner and biker and understood how much running meant to me and even worked with me to pick the best date to coincide with my race schedule.

On the day of my surgery I had 8 different holes in me at the same time.  I  had my heart  stopped, valve replaced with a mechanical one and then started back up and my Mini Zipper chest incision closed.  It still is hard to believe that all that took place.  I often joke that running a marathon is like child birth.  If it was not no one would do it more than once.  You only seem to remember the great parts of a marathon and not how much it sucks during the actual event.  Having open heart surgery is similar except I choose a mechanical valve so that I would not have to ever do it again.  They say a tissue valve would only last about 15 years and with my active lifestyle I decided why take the chance of blowing out another valve.

Granted there have been some down side to that choose but I have no regrets.  The biggest is the fact that to prevent blood clots around the valve I now have to take a blood thinner once a day but looking back it really has been no big deal.  I have a meter and take one drop of my blood from my finger once a week and call in the results.  I consistently eat well and take my meds and so far so good.  I have noticed that running or at least staying active helps a lot.  I am no spring chicken, turning 60 next month but over all this whole episode has helped me to appreciate life more and it probably the major reason I choose to retire from UPS where I was a well respected Pilot/Manager with 26 years at the company and 37 total years flying airplanes all over the world.

Now as the anniversary of my operation comes and goes I am presently preparing to go on a week long cruise on Windstar Cruises out of Tahiti.  After that I am going to spend a month in Tahiti and then on to Australia for the Outback Marathon.  That will be Marathon number 59 for me and the 7th since my operation.  I was back to running a mere month after my operation and ran the Berlin Marathon 2 months later.  I love to set goals and that fact has kept me motivated over the years.  As I said I turn 60 next month my goal is to run my 60th Marathon in Bordeaux France in September.  I did a 50 miler when I turned 50.  Ran 55 miles in two days at 55 so it seams fitting to finish 60 marathons at the age of 60 and open heart surgery was not going to stop me.

No telling what goals I will set in the coming years or what obstacles will be placed in my way but I hope that running will forever help me achieve those goals.  I was walking the afternoon of my surgery and my level of fitness was credited for my fast recovery.  Why mess with success.  I often hear people tell me that they no longer run because of their knees or other bothersome body parts but the facts don’t lie.  Those that run and stay active have fewer complaints than those that don’t.

Here are some pictures of my recovery process. 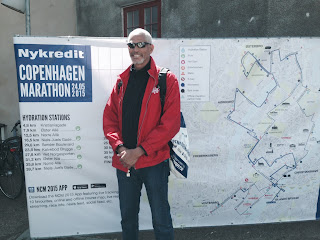 The day before Marathon number 58

It has been a very interesting journey and I have enjoyed the ride.

No telling what the next 20 or 30 years will be like but I know one thing for sure.

I will not be the one sitting on the couch watching it go by.