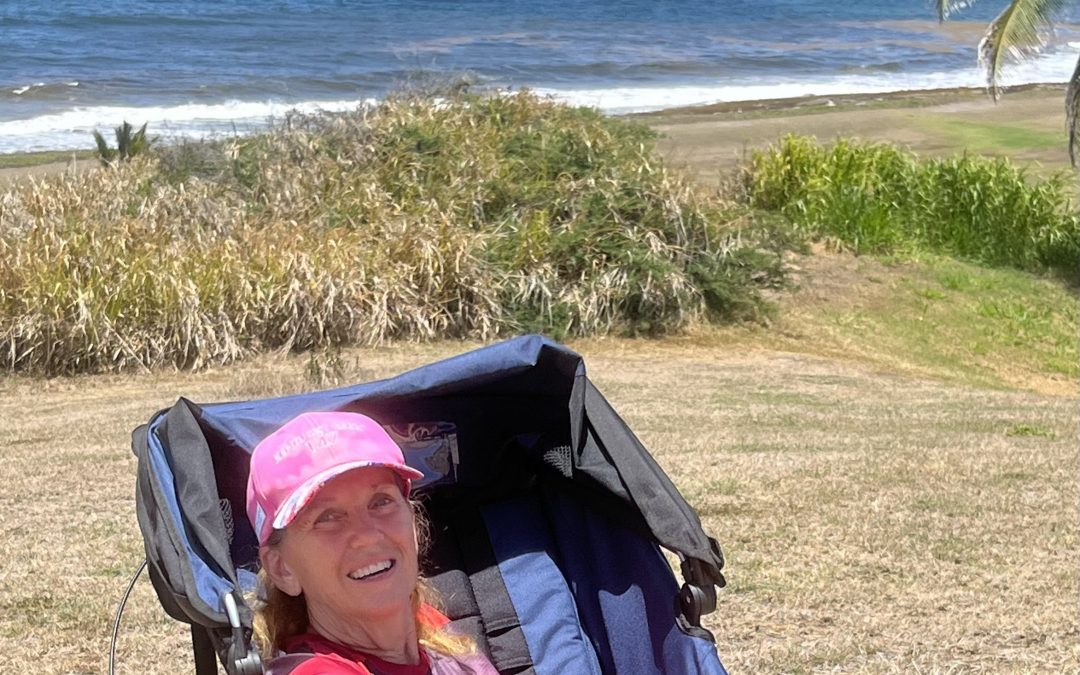 No two people with the disease are alike and life expectancy after diagnosis is 2 to 20 years.  That in itself, is a very wide range.  The only thing we can do is to enjoy life as best as we can along the way.  We believe in the additive model.  What more can we do and not concentrate on what we can no longer do.

If I have learned anything about Early Onset Alzheimer’s it is that you have to be flexible.  After 8 years navigating this twisting and winding road I have learned a great deal along the way.  When my now grown kids, were growing up, I learned flexibility was extremely important.  Just because these three very talented and active youths had the day planed out, rarely did the day go as planned.  As a pilot, for over 37 years we always had contingency plans and being in management, most of my career I kept coming back to that principal day in and day out.

As the disease progresses it becomes more and more difficult for the brain to talk to other body parts on a regular basis.  I try my best not to dwell on what Catherine can no longer do but, by contrast, concentrate on what she can still do and try my best every single day to support those accomplishments.  I have written about the critical role exercise plays in keeping this disease at bay  so I am always thinking of ways to keep the brain talking to the body.

As running becomes more difficult, especially long distance runs of 4 miles or more I have devised a work around.  That is where the “Cat” mobile comes into play.  Unfortunately, back in April, while on the west coast, Catherine had two seizures within 4 hours that landed her in the hospital for her first overnight stay.  In fact, she was there for two nights and I had to beg and plead to get her out of there.  It was not that they did not have her best interest in mind, but it was more that the environment was not conducive for someone with Alzheimer’s.  Many actually get much worse over time.

With that said, she is now on anti-seizure medications and even though it is great at keeping them from recurring, they do have some side effects.  Mostly, she becomes extremely tired especially right after taking the medication which she now has to take twice a day.  The evening dosage has its own challenges but the one in the morning makes it very hard to get her to exercise at the intensity she once did.

My new work around is to break up our exercise routine to several times a day however it is now very difficult to get her to run at all.  It was hard enough in the recent past, since her coordination is now compromised.  So she now has to be very careful with foot placement to prevent trips and falls.  So instead of trying to get 6 or more miles done several times a week we now break it up to vigorous walks of a few miles each, several times a day.  One of them might simply be walking the halls of the hotel.  Down the hall, down the stairs and then down the hall that hall and back up the stairs. 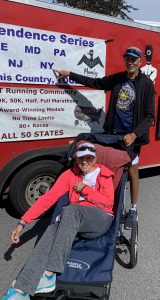 The other thing we now do is to go for longer walks with short sporadic runs until she tires and then give her a ride in her new ride.  That gives her some time to recuperate and then out she goes to continue the walk/run.  Catherine really enjoys the breaks and I still get my exercise while running while pushing her along.

We have even done two races with her new ride and it breaks down so I can put it a bag and will fit in the trunk of some cars.  The back seat of all cars and with the wheels on right in the back of a SUV.  I do have to take it to the oversize baggage area but Delta does a great job transporting it for us.  If anyone is interest here is the information on the jogging stroller below.

It is not perfect but works really well for us as we  adjust to the new normal.  I have vivid memories of Dick Hoyt as he did Marathons and sometimes even Iron Man Competitions while pushing his Adult son.  He has since passed away but remember the statue of him along the Boston Marathon route which I ran back in 2016.  I have been a firm believer in, if someone else can do it and I want to do it, then I can also do it.  Maybe not a marathon right now but since I have 2 more to get 70 marathons done by the time I turn 70 in three years you never know with me.

The first race we did to try out the Cat-mobile was in NY with our dear friends with MainlyMarathons.com, in Jervis NY.  I did the half marathon to get me one step closer to getting a half marathon in all 50 states.  Cat already got a marathon done in all 50 states back in 2020.  We started out walking together for the first out and back then transitioned to the Cat mobile while I did 4 out and backs.  Cat got out and did another out and back and then back in her ride while she cheered on the true die hards that were doing the marathon and other various distance races.

Once again she got out for the final lap together as we once again finished up hand in hand.  The second race was in nearby, Roswell Ga, along the Chattahoochee river.  This time I pushed her for the first 5 five miles in the 10K and she walked with me for the final 1.2 miles and we both had a great time.  There was one rather steep hill and I kept telling myself what goes up must go down and we kept yelling wheeeee all the way back down.  It does have a strap that goes around the runners wrist just in case you trip and fall and don’t have a runaway Catherine Popp. 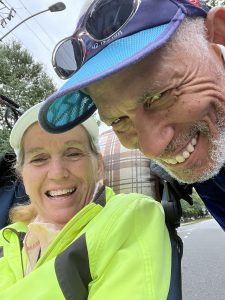 I think she was worried about the down hills

We are now in St. Kitts for at least a month.  We got stuck here 2 years ago for a month when Covid hit so fingers crossed nothing like Monkey Pox prevents us from getting back to the states this time around.  My sister and sister in law have a condo there and found someone to help out several times a week for several hours a day while there.  I must admit this will be hard for me since I do have a tendency to just do everything myself and rarely ask for help. 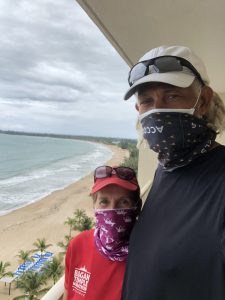 Just prior to us leaving St, Kitts April 2020

This trip, Shermel did a great job on Cat’s hair

I say at least a month but it might turn into two months depending on how things go.  Nonstops back to ATL come to an end after Sept 3rd but then there is always winter for a return trip.

The way we left Atlanta was a first for me.  Usually we just catch the sky train from the Renaissance hotel to the airport in ATL but with the Cat-mobile and Cat’s 50 state marathon quilt and various other items for an extended stay was a bit much, so I opted for an Uber for the 3 minute ride to the airport.

At the sky cap stand, the guy there, loaded up our bags on his cart and bypassed the mass of humanity to the front of the Delta Sky Priority lane.  It does help to both be Diamond Medallion and Million Milers.  My motto is, “Don’t leave home without her.”  He then called for a wheelchair and took the oversize bags to the oversize belt and even though he was wearing a mask I could tell he was very pleased with my generous tip and heart felt “THANK YOU.”  I very nice lady showed up with the Wheel Chair and swiftly took us pass the very long lines to the Wheel Chair Security lanes, along with about 50 others.

A mere 45 minutes from the time we were dropped off at the curb we were in the Sky Lounge enjoying juice, fruit and one of the best machine made cappuccinos known to man.  I gave myself 2 plus 30 for this flight and wondered with out their help if we would have made the flight on time.  I have not seen crowds like that at the airport since Mother’s day and made note to myself that few there were worried about gas prices or inflation. They simply wanted to get away to far flung place like Punta Cana and Cancun.  Unfortunately the Customer Service line was extremely long for people needing to rebook their flights, but our flight was right on times so no worries for us.

For me to fully unpack our bags and finally have a meal out on a patio overlooking the water instead of cooped up in our hotel room as we have for the last two years was what I was looking forward to.  There is a golf course across the street from the Condo with our names on it for morning and afternoon walks/runs along the cart path and too many beaches to mention for us to walk hand in hand.  There is a  Marriott right down the street and we will make sure to frequent often as we sip soft drinks by the pool.  We do have two friends coming down for a week each to enjoy the fun and sun and have booked a morning sail with Miles.  Instead of rental cars, Mr. Mack, personal taxi service will be our new mode of transportation while there.

Fingers crossed that all goes well, but as I started this blog post off you have to be flexible in life in general and especially when caring for someone with Early Onset Alzheimer’s.  Don’t get me wrong.  I don’t  have all the answers and it has not been a bed of roses by any stretch of the imagination but that is how life is. Very few go thru it without obstacles along the way and we all know how it ends so we might as well make the best of it. 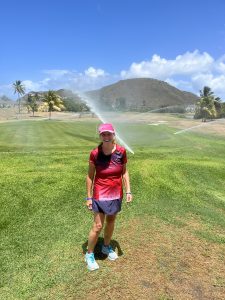 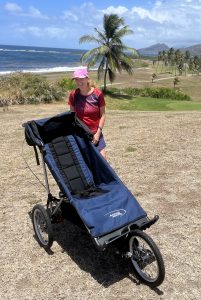 Showing off her new ride

For those of you that would like to read about the last time we were in St. Kitts  you can go to Amazon and buy a copy of our book Running All Over the World, Our Race against Early Onset Alzheimer.  You can get it now on Kindle for less than 10 bucks.

A portion of the proceeds on the sale of this book will be donated to organizations providing support to Alzheimer’s patients and their caregivers.