Why Do a 5K Race When Catherine Does Not Run Anymore? 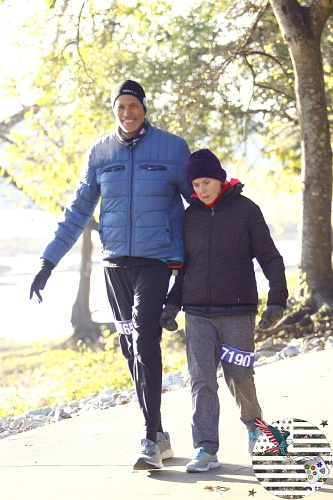 Why Do a 5K Race When Catherine Does Not Run Anymore?

Now that we have settled down, somewhat, it would make much more sense not to incur additional expenses of race registration, hotel and meals when we pay room and board at Brookdale Senior Living Solutions.  My plan all along was to still travel once a month for 3-4 days, so if we can fit in a race along the way, why not.  Catherine and I very much enjoy doing things together so for us to bundle up and walk along the Chattahoochee River in Columbus, Georgia, sounded like a solid plan.

We were going to see Cat’s folks for Thanksgiving a few days later so off to Columbus we went.  The Marriott hotel was the race, Hero’s of America Marathon, Half Marathon and 5K, designated hotel so the rate fitted right into my new and revised budget.  Also the packet pickup was right in the hotel and the start/finish was right out the front door.

With hundreds of races under our feet I am pretty good at picking the right clothes for the current weather conditions.  I always figure you can always take off clothes if you get too hot but can’t put on clothes you left behind if you get cold.  So layers and plenty of them was the plan for the day.  The feels like temperature was 32 degrees and with light winds we were both not too cold or hot.  It was funny lining up for the start as others were clearly dressed to run whereas we were more suited for a stroll in the park and that is pretty much what we did.

It has been over 6 months since Catherine has run and unfortunately that ability has been taken away from her as the disease has progressed.  I must admit that that fact is rather sad since, in actuality, running is what brought us together, in the first place.  My goal for us was to keep a steady pace going and enjoy the scenery and our company for the entire 3.1 miles.  Of course, as we always do, cross the finish hand in hand.  I can proudly say we did achieve all of those goals.

Back in the hay day of our running and racing exploits we were doing about 16-20 races a year.  This being the last one planned, we will clock in right at 10, with me pushing Cat in the CatMobile during a few of them.  We have on the schedule to do the Key West Half Marathon the middle of January.  I will be, once again, pushing Cat most of the way in the CatMobile.  I have done a few Half Marathons already with Cat usually walking along side for 3 or so miles.

That is the only race I have planned right now but have decided to complete the 7 half marathons needed to complete one in all 50 states plus DC next year.  Maybe I will also pick off one or two marathons out of the 8 needed to get them all done in that category.  That is going to take a bit more training than I have done recently to get myself in shape enough to push Cat that far.  Only time will tell.

As always, I figure if anyone else can do it and I want to do it myself then it is in the realm of possibility.  I will just need to find races that have a very lenient time policy like Mainly Marathons.  Another problem is that Cat is not going to want to sit for 6 plus hours and I don’t blame her, so I will have to schedule walk breaks for her.

From Columbus we were are off to visit Catherine’s family for the Thanksgiving holiday and back to, “ The Brook” which I am affectionately calling it now.  Much better than the Old Folks Home.  It is always interesting to observe folks react and interact with Cat when they have not seen her for awhile.  Last time she was with her family was back in August.  I try my best to make the pilgrimage every 3 months.

Unfortunately she now has Aphasia which is an inability to comprehend or formulate language because of damage to specific brain regions.  She still has rather good comprehension but she often speaks in a form of word salad or commonly referred to as gibberish.  I try to find a word or phrase that she might be repeating and engage her in a short conversation.  For example if she repeats the word, “Mom”,  I might remind her when we will see her next and she might say something like,”that would be nice.”

It reminds me of when we were touring Egypt in 2019 and Cat suggested we use our own language consisting of gibberish to get the constant street sale folks to leave us alone.  While at, “The Brook”, we were sitting next to a lady and Cat chimed in during our conversation with some of her own word salad.  I mentioned to the lady that sometimes Catherine only knows what she is truly saying and the lady grabbed Cat’s hand and said, “I hear her in my heart.”  I could not had said it better myself.

I cherish those brief times when, out of the blue she will tell me she loves me or thank me or simply show her appreciation with an unprovoked hug. Occasionally we can participate in a normal conversation for a brief period of time.  It is still unclear why, however they call that paradoxical lucidity which refers to an episode of unexpected, spontaneous, meaningful, and relevant communication or connectedness in a person who is assumed to have permanently lost the capacity for coherent verbal or behavioral interaction due to a progressive and pathophysiologic dementing process.

Returning to my original question in the title I am reminded of this quote found at ThePurpleSherpa.Org 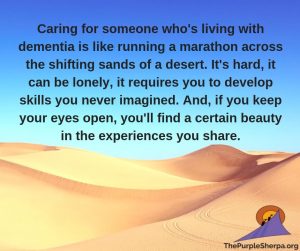 It reminded me of the Australian Outback Marathon and Half Marathon we did back in 2015.  Cat had broken her ankle 6 weeks prior but was not to be out done.  So with a boot and a cane she walked the half marathon in the desert sand.  I did the full where we could both see the famous Uluru (Ayers Rock) and Kata Tjuta (the Olgas) and even though we did it separately we both came away with the same impression, which was, that it was a very spiritual experience.

As time goes on with this disease my goal now is to keep her brain talking to her body as long as possible.  The amount of determination it took for her to complete the race in the shifting sand tells me that if we need to make side trips, to a race, as motivations for her to walk 3.1 miles, so be it.  We do walk 4-6 miles through out the day.  “The Brook”, has a half mile path around its wonderfully wooded and landscaped facility with another 2 miles of carpeted corridors indoors.  Maybe I will chart out an indoor 5K one day.

No one will win this race we call life but Catherine and I will continue to compete one step at a time as long as possible.  Right now we are concentrating on quality versus quantity.  At, “The Brook”, there are many here in their 80’s and 90’s with the same philosophy and it is very enlightening to experience.